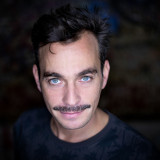 It was clear during the first season of HBO Max’s Euphoria that the visual world of the series is in safe hands. Although the series’ director of cinematography, Marcell Rév is Hungarian, it looks like we will soon start referring to him as a cinematographer with Hungarian roots, since the only Hungarian project he has worked on in the last five years was Ildikó Enyedi’s film “The story of my wife”. Rév and his fashion designer wife, Zsófia Geréby and their children have been living in the United States since 2018. He has no professional reasons to return to Hungary.

He began his studies at Budapest’s ELTE University in 2003 where he studied the history of cinema, and in 2006 he started attending SZFE (The University of Theatre- and Cinematography Art in Budapest) where he studied to be a film and TV cameraman in the class of Tibor Máthé. When he graduated in 2011, he was already considered excellent at what he did, and this came to be proven very quickly. However, we will not review his career at this time. Instead, we spoke with him about an important source of inspiration which has been with him from the beginning: photography. We gathered a selection of his analogue photos, some of which are private, some are for work, some were taken during work, and some just for fun.

All kinds of photos

Marcell Rév tried to humbly resist the idea of publishing a selection of all his photographs here, on Telex, saying that he doesn’t consider himself a photographer. He explained that in his opinion photography is art, while being a cameraman is more of a craft. He told us that he uses photography as a reference – much like everyone who works in the visual arts. His attitude when taking or using the photos is not the same as that of a photographer in the same situation. He said that he takes some of his photos simply to have a good picture, and there’s no creative desire behind it. Naturally, photos teach and inspire him, and he also collects albums of various publishers and photographers. His own photos taken for his work and those he gathered on the internet are organized in digital folders on his computer.

Before he begins work on a project, he always goes to these photos first, and then he creates a separate collection of photos for the specific project. If there’s enough room, he puts the photos on the wall, to see them all as a whole, and then saves these collections created for the specific task. Once the visual essence of the film, the whole concept is ready, he sets out to build the whole film scene by scene.

For a scene about having coffee you don't necessarily need to look for pictures of people having coffee, even a computer game can provide inspiration. But there are other sources too: poetry may be of important help for example. But if we are to look for an example in photography, Rév actually referred to the work of the world famous photographer, Nan Goldin as his inspiration in the short film announcing the second season of Euphoria. He says he is not attempting to copy Goldin’s photos. Instead, he is attempting to use lights to create the closeness which exists between the person in the photo and the photographer. He is looking for the personal effect while using the tools of motion picture.

It was huge news that the second season of Euphoria would be shot on film, and not just any kind, but the legendary Kodak Ektachrom. The director, Sam Levinson personally contacted Kodak to make sure there would be enough raw material for the film. The choice of raw materials, reminiscent of classical times, is in no way intended to evoke nostalgia. In spite of the fact that according to the visual concept, the first season is very much present, the second season rather resembles the memories of high school years.

The intention of the filmmakers evokes art and memories, as well as the highlights of filmmaking in a much deeper, multi-layered way. What makes the whole thing incredibly modern is creativity, and the combining of options and consciously using or not using them.

Rév is not against the digital age per se, he simply had the opportunity to create wonderful scenes with analogue methods. Shooting on film is an especially concentrated state of mind: it’s a combination of precision, knowledge and imagination, and one has to see as if the film were inserted in their eyes. Obviously, it’s not the raw footage that the viewer sees, as post-production is used in this case too, but the decisions about what we will see are mostly made when shooting. This analogue thinking is very close to the way a photographer thinks, as the goal is not for the pictures to remind us of a previously made film.

Although – speaking of older films – the pictures of the New Year’s party of the second season may remind us of silent films. These shots also evoke modern photography. Images flash up, acting as flashes of memory, but this flash can also be the light of the flash, capturing the state of the characters in that moment. He shows us where they are, freezing an emotional state, which is something photography does best. These shots are also very close to the photos of Nan Goldin, for example. Another name brought up as an artistic precursor in connection with the series is Frida Kahlo, but I also found a Jeff Wall among the family photos, which actually has a precursor in an Édouard Manet painting – the newer version of which you can find below, among the photos.

Rév is lead cinematographer of the series, and although this is strictly regulated across the pond, he still spent a significant amount of time behind the camera. The lead cinematographer needs special permission to get behind the camera, as the unions protect the cameramen’s work. But he simply loves to be the one to shoot the picture. When there are two cameras shooting a scene, it is important for him to follow both views, and he couldn’t sit just behind one of them. However, every scene is carefully choreographed, as everyone must know exactly how a camera will be moving: whether in hand or on a dolly. When a set is smaller, he likes to be there with the actor/actress: this brings about a more intimate relationship, and a lot depends on the personal presence. Less choreographed situations might occur at such times, and sometimes a decision must be made in moments: for example, about shifting the body weight so that the close-up can still show more of the other actor's other eye.

Marcell Rév has had a camera since the age of seventeen. When he bought it he thought it could help him learn a lot. When he wasn’t shooting many films, he took photos to keep his visual thinking alert. And now, he is working in complete freedom with Sam Levinson, the writer-director of the HBO series, Euphoria. He says that this is exactly the kind of creative freedom that he had while at university when shooting his short films for the exams. The big difference is that now he has more money to do it.