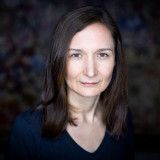 A teddy bear can symbolise many things and usually evokes pleasant associations. Some, of course, are sad symbols of a childhood left behind. Children grow up, it's the way of the world, some might say – but when a 15-year-old girl is forced to enter the adult world, and especially its darkest recesses, the alarm bells go off: no, that can't be the way of the world, and neither should be the way the teddy bear's owner lived her childhood.

She lost her mother at the age of 12 and never even met father. Since she has no siblings nor relatives, she has been raised in an orphanage. All this is fiction, of course, a story in a film, but from the very beginning the viewer knows that this fiction is very close, perhaps too close to reality. And not just because the girl playing the main character was actually living in a transitional home for families at the time of filming. Flóra Chilton's film Válaszúton (Crossroads) is about the inner workings of child prostitution and human trafficking which are very relevant and very Hungarian problems in 2022.

Deep poverty, Roma background, institutional care: all of these are risk factors in the sexual exploitation of children," says a joint country report prepared by ECPAT and Hintalovon Alapítvány (echoing the experience of the Dutch police, who recently organised a sensitisation tour in Hungary).

In the film, the main character (played by Eszmeralda Zsákai) leaves her teddy bear to her friend at the orphanage, and what happens from there is impossible to write about without spoilers, so let's look at the background. The other main protagonist, Deni, (played by Cristopher Pászik) goes home after being released from prison, only to have his foster father set out the only possible course for a free life: find a girl who can be forced into prostitution. He is given two tools: a BMW and a gold necklace. In a country disco, a barmaid played by Franciska Farkas shows him who the "orphanage girls" are on the dance floor, and he soon manages to hook one of them.

Then comes the seduction, the nice words, the promises, and 3 days later we are at the teddy bear scene, when the 15-year-old girl stuffs everything she owns into a sports bag. By this time the boy has grown quite fond of her.

Crossroads is not a film that will be remembered for its overwhelmingly natural dialogue and breathtaking acting (some of the actors are amateurs or semi-amateurs, as we will see below); but it is an important and memorable film, and its storytelling is so striking that it overcomes any minor shortcomings.

The director, screenwriter and editor of this message movie is Flóra Chilton. The film's greatest strength and virtue is the story itself and the circumstances in which it was made. The script was written in consultation with experts, based on real events, and the reason why the final result is not a documentary was revealed after Monday's press screening.

When making a film is not an end, but a means to an end

Crossroads became a feature film because of a social assistance project: Önismereti Filmes Műhely (Self-Awareness Film Workshop) is a joint project of two NGOs, Életrevaló Egyesület and Északi Támpont Egyesület. Both have been in contact with several temporary shelters, children's temporary homes, families' temporary homes and orphanages for years.

In the workshops they hold, in addition to sessions in drama pedagogy, filmmaking sessions are also held for children, where they become the protagonists of their own creations and work on the problems they are facing.

They started by making video clips and short films at first before Crossroads, which has been to film festivals, won awards and will soon be available on RTL's new streaming platform RTL+.

"For us, making a film is not an end, but a means: a tool to achieve social change, both inward and outward: outwards, because we want to educate people while entertaining them. Many are curious about such topics, because we are often curious about what we are afraid of,"

Bálint Tóth, the film's production manager and head of the aforementioned Északi Támpont Egyesület explained to Telex after the screening.

We spoke with his colleague, Éva Preszl, head of the charity association Életrevaló, who co-produced the film, about the inward focus.

She and her colleagues have been organising the Self-Awareness Film Workshop since 2011 with the goal of providing mental health support to affected children, building community through drama education, developing the children's self-awareness and increasing their self-confidence.

"The goal might as well be a film. The children in this film are not actors, they simply participated in a drama pedagogy workshop that we organised. We don't have model children, but these children are capable of fantastic things." According to the filmmakers, the female protagonist, Eszmeralda Zsákai, is a good example of the latter, having made huge progress in a very short time.

Preszl and her colleagues asked Északi Támpont Egyesület to produce films as part of the sessions. "It's very exciting to see children at risk in such a sensitive situation working with a film crew, and this is why the preparatory programmes were so important," she explained.

"During filming, we bring together two worlds: young filmmakers, who are intellectuals, and children who are being raised in orphanages; creating something brings them together. They discover their own talents in this community work, and they are able to focus on working in a community,"

- When I ask who the protagonist should be, everyone always puts their hand up, but not everyone is able to do it. I always say that they are the ones who choose the main character: the one who has the will, who is always there at rehearsal, and has the talent. Kids like that often start going to castings on their own afterwards, because they realise they can be good at it," he reflects on the importance of that initial impulse.

He cites a related success story: one of the boys, who lived in a group home, called him after the shoot to say that he had saved up enough money for a camera by working over the summer. Tóth then asked a sponsor who is in the business of selling cameras if he could give the boy a discount, and they ended up lending the boy an outgoing model for a year.

He had only had the camera for three weeks when he received a letter from the manager of one of the malls asking him if they may post a video he shot there on their official website and inviting him to one of their upcoming events. “The mall's marketing director had no idea that the boy came from a difficult background, and that he had done it all on his own, he just saw the video online and liked it. This impulse was obviously needed for the boy to believe that being a cameraman was for him.”

Flóra Chilton has been working with NGOs for years. She wanted to make an awareness-raising film for girls at risk "that in no way idealises this situation. I wanted to make a film after which they would never ever think that this is an attractive thing to do," she explained in a previous interview. While they worked with feature film elements and tools, they wanted to remain authentic at all costs, which is why the expert consultations were necessary.

"I asked how realistic it was to have a girl seduced and forced into prostitution within two or three days. Experts say that in reality the persuasion can take much less time, even a single conversation can be enough sometimes,"

she said in the interview. Otherwise, their main goal was to combine social presence with filmmaking, while creating something of quality.

According to Bálint Tóth, Flóra Chilton is great at what she does, she is not your "typical flamboyant director", and she has a great virtue:

“She always works in such a way as to never put a child in an undignified situation. The film's topic may be undignified, but she meticulously protects the children, even while they are acting.”

Éva Preszl said that the actors had seen the film already and their first reaction was silence. Then pride. "There was one child whose mother praised them at the screening for the first time in their life."