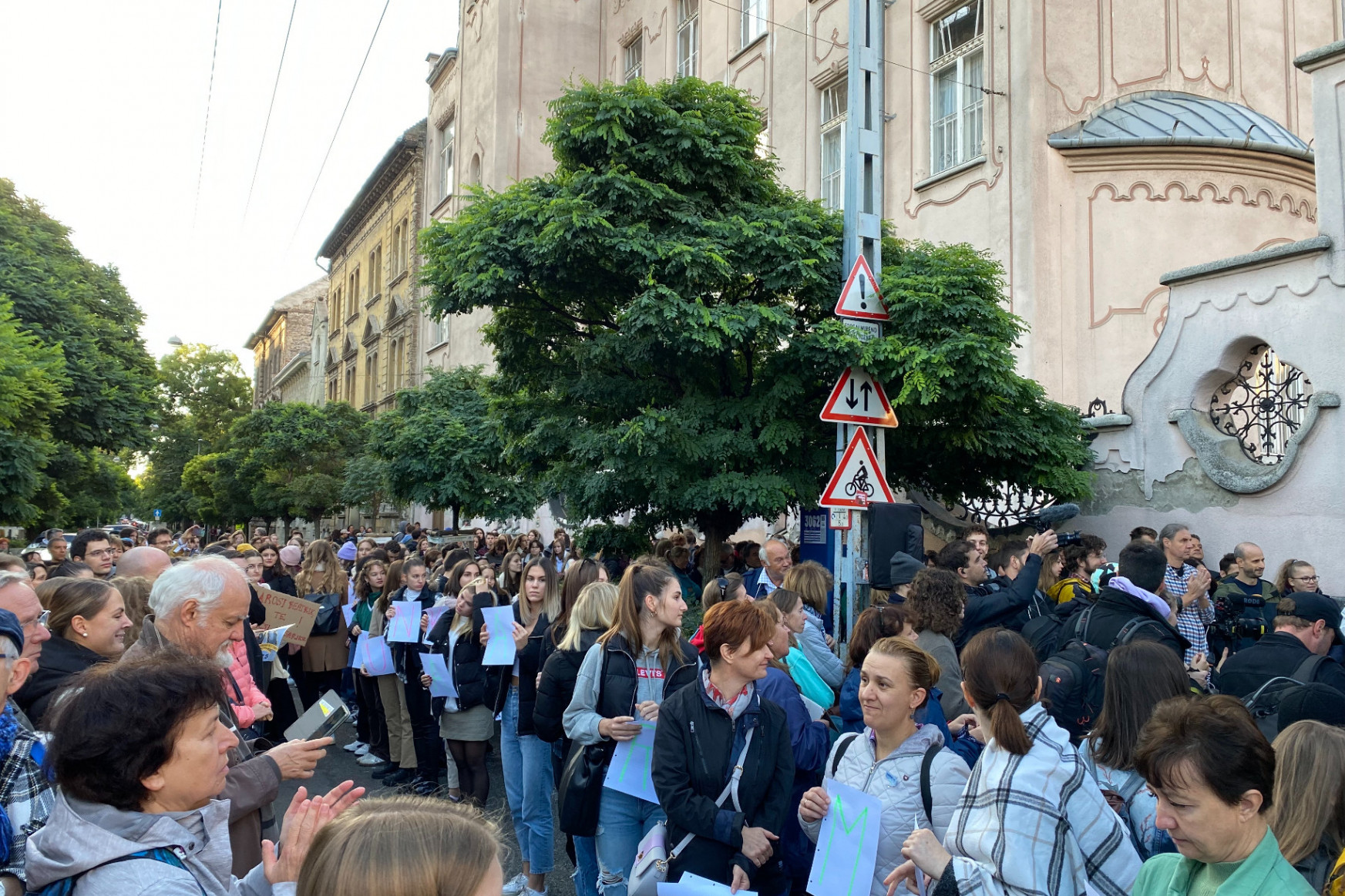 Hundreds gathered in front of Kölcsey Ferenc High School in Budapest on Monday morning to protest the dismissal of several teachers who had been working at the institution. The teachers were dismissed on Friday for having participated in the civil disobedience movement.

One of those fired, Tamás Palya, told Telex that he and the other dismissed teachers are thinking of filing an employment lawsuit. However, the school district's reply to Telex said the dismissal of the teachers was justified because they had repeated their "unlawful actions" several times even after they were given written warnings.

In recent weeks, several school districts have sent letters to teachers involved in civil disobedience threatening that if they continued their walkout, it could result in dismissal, and the principal of a high school in Miskolc was dismissed on the same grounds a few weeks ago.

Civil disobedience as a last resort

Hungarian teachers have long been demanding higher wages and a lowering of their workload, among other things. Although civil disobedience is not a legally regulated form of action, educators turned to it after their right to strike was virtually taken away with a government decree in February.

Initially, an all-day, country-wide strike was announced for March 16th this year, but the government was quick to respond with issuing a decree which stated that due to the pandemic, children must be supervised at all times in the classrooms, at least half of all classes must be held, and for students preparing for their matriculation examination, all lessons in subjects they will be tested in must be held – thus making a strike of virtually no effect, which started the civil disobedience movement.

Since the beginning of the new school year last month, students have organized protests in support of their teachers and their demands and the Teachers’ Unions have appealed to the European Court of Human Rights in Strasbourg against the government's denial of their right to strike.

Telex spoke with one of the teachers dismissed on Friday, Tamás Palya, who said:

"I was on my way to the second floor to teach a class and before the bell rang, I got a phone call from the principal. He asked me to go down to his office, and I immediately suspected what this would be about. Representatives from the school district were waiting for me and they told me that they were just enforcers, they had no comment, and then they handed me a piece of paper saying that they were terminating my employment as a public employee".

Palya' dismissal will not only affect him, but also his students, especially because his class is graduating this year: "we are preparing for graduation and for the prom with my class, and now all this will happen without me".

Hundreds of students, parents, and sympathetic protesters held a gathering on Friday evening in front of Kölcsey Ferenc Gimnázium and chanted “Hands off our teachers!”

One of the parents wrote a letter addressed to Sándor Pintér, Minister of Interior, Zoltán Maruzsa, State Secretary for Education, and Gabriella Hajnal, President of the Klebelsberg Centre, (the government entity under which all state-owned schools belong) in which he states:

"We do not accept this decision and we ask for the teachers' reinstatement."

He said that the fired teachers are first and foremost human beings, and "they are fighting for our children and the future of education." He said that he addressed his letter to Pinter, Maruzsa and Hajnal, because he believed that the school district had acted on instructions from above when it dismissed the teachers on Friday.

An NGO is organizing a protest in support of the teachers and their demands for change this Wednesday, October 5th, in Budapest and the Teachers’ Unions have announced a country-wide strike for October 14th.