Orbán compared Márki-Zay to a cooled stone, while Márki-Zay identified Orbán as a weary face 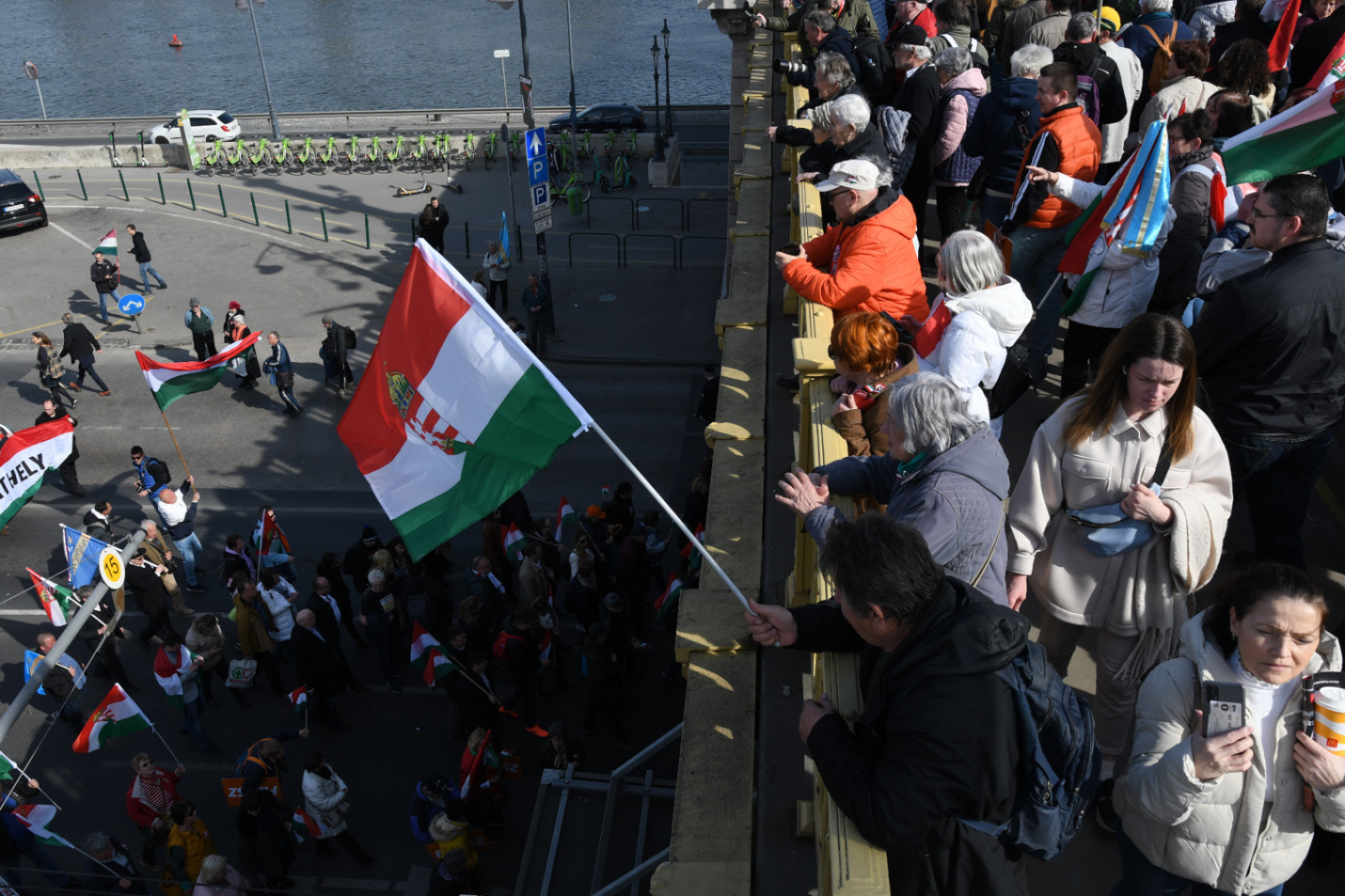 This year’s remembrance meetings on the 15 March – although overshadowed by the war next door – included a large assembling of opposition supporters and a pro-government peace march. The speakers reflected both on the events connected to the war, as well as the upcoming parliamentary elections: In Orbán’s opinion, we will soon be choosing between the right, which favors peace, and the left, which is in favor of war, while Márki-Zay said that the choice is between the East and Europe. Translation by Andrea Horváth Kávai

1. Celebrating in the shadow of war

It was to be expected that this year, the events on 15 March would be overshadowed by the Russian-Ukrainian war, and that the organizers and the speakers would respond to the events in some form.

This time, the pro-government peace march was not advertised as being against the left, Soros, Gyurcsány or the decision-makers in Brussels. Instead the marching crowds carried signs which said “No war”. The pulpit that Orbán stood behind had “peace and security” written on it, and in his speech, the prime minister also focused on emphasizing that he is in favor of peace. At the same time, he belligerently attacked the left – but we will get back to this in point 3.

The opposition reacted to the war in two ways: they placed photos showing Orbán and Putin together along the route of the peace march, and – unlike the peace march – the opposition gathering had Ukrainian flags and other symbols pointing to Ukraine.

2. The pre-election war of numbers: check

This year, the opposition did not “hand over” all the main roads in the capital to Fidesz. While the peace march started from the Komjádi swimming pool and used Margit-bridge to get to Kossuth Square, Péter Márki-Zay and the opposition parties organized their gathering on the Buda side, in front of the University of Economics.

During the public media’s live broadcast it was announced that the opposition had planned on meeting at Március 15. square, but less than 300 people showed up, while the peace march was attended by hundreds of thousands. Anyone can decide for themselves how much truth there is to this by simply checking the bird’s eye view photos of the events.

These clearly show that the government’s event was attended by more people – Kossuth tér is much bigger than the area in front of the University of Economics. The opposition can take comfort in the fact that there was a bigger crowd now than on 23 October at Heroes’ Square, and that the quayside starting at Szabadság bridge was filled all the way to the last building of the university.

The peace march, however, was attended by a significantly larger crowd, as they filled up Kossuth square in its entirety, as well as part of the neighbouring Alkotmány street. Viktor Orbán even commented in his speech saying “We are looking really good! Perhaps better than we ever have before!”

3. Orbán’s narrative: the right is for peace, the left is for war

The prime minister’s speech was mainly about two things: standing for peace, and attacking the opposition. This time, Orbán’s task was to find a way in his rhetoric to fire up and mobilize his supporters for the elections while proclaiming peace.

In spite of this, he started his speech by stressing that he will continue to fight against international media, the Brussels bureaucrats, George Soros – and of course, the left. Without naming him, he described Péter Márki-Zay as follows:

“Their candidate, previously thought to be a comet, is actually a cooled stone that has hit the ground. The whole shebang on the left is stuck in the ground.”

Throughout his speech, Orbán spoke about his chances at the elections with confidence:

“I honestly don’t remember a time when the stars looked better than this 19 days before an election”. His opinion about what’s at stake at the elections is that “the right is for peace, while the left favors war”. He said that “the left would stumble into the war, and they would send Hungarian soldiers and weapons there” (referring to Márki-Zay’s previous statements that if NATO were to decide so, he would support a military intervention). Orbán continued to say that “the best medicine against grave danger is a big victory. We will win these elections, and then there will be peace, security and calm”.

When commenting on the war, Orbán conspicuously never condemned the Russian aggression – he described the events as a chess game of the Great Powers. Among others, he said: “The wars are not fought for us, or in our interest” and

“Central Europe is but a large chess board. Hungary is just another dummy for the world powers, and if their goals required it, they would gladly sacrifice us”.

In Orbán’s opinion, our main interest is “to not be a pawn sacrificed in someone else’s war” and “no Hungarian should end up between the Russian sledgehammer and the Ukrainian anvil. We will not be sending soldiers nor weapons to the fields of war”.

4. Péter Márki-Zay’s narrative: Let us choose Europe instead of the East!

The opposition’s gathering had many more speakers than the governing party’s meeting. Other than from Péter Márki-Zay, the crowd also heard from:

During the event, the refrain of their campaign song, "power belongs to the people", was repeated often, but the main message recurring in most of the speeches was that the opposition favors the West and Europe, while Fidesz favors the East and supports Putyin – and it is between these two directions that the choice will have to be made on 3 April.

For example, Donald Tusk said: “Viktor Orbán and his team have worked hard to create the most pro-Putin image in all of Europe.” Klára Dobrev of DK said that “it is up to the Hungarians alone to choose Europe. It’s now or never!” (referring to a poem by Hungarian poet Sándor Petőfi which is an intrinsic part of the 15 March celebrations).

Márki-Zay put it this way:

“We only have a single, historic choice: to choose Europe instead of the East, and to choose freedom instead of despotism.”

The surprising thing in Márki-Zay’s speech was that he did not mention Putin by name at all.

5. The smaller parties responded to the war in different ways

On 15 March, Magyar Kétfarkú Kutyapárt (The Hungarian Two-Tailed Dog Party) organized a donation-collecting party where they received donations for the Ukrainian refugees, while Mi Hazánk (Our Homeland) protested against NATO troops being stationed in Hungary.

Mi Hazánk Mozgalom, lead by László Toroczkai organized an event advertised as a “pro-independence” gathering near the National Museum. They mostly protested against the stationing of NATO troops in Hungary. MP Dóra Dúró said that although we have nothing to do with the war, Orbán is still allowing American NATO troops to be stationed here, thus involving Hungary in the conflict.

She mentioned that she was the only one who voted “no” on the declaration with which the Hungarian MPs supported Ukraine’s EU membership. Mi Hazánk has built their campaign on protesting the so-called “Covid dictatorship”, but now that the epidemiological restrictions have been lifted, they are clearly in search of a new campaign topic.

The Two-Tailed Dog Party did not hold a procession as they did on October 23rd. According to their statement, they chose to organize a donation-gathering party at Nyugati Square instead with the slogans: “Blanket, mattress, non-perishable foods”. As they wrote: “Is there a more fitting way to celebrate 15 March than by a donation-gathering party, where charitable musician ladies and gents are supporting the hard work of the helpers in our donation tent? Of course, there isn’t!” The party has been gathering donations for the refugees fleeing the Russian-Ukrainian war for a few weeks now.