How to get top marks from a Hungarian professor: spout conspiracy theories about George Soros 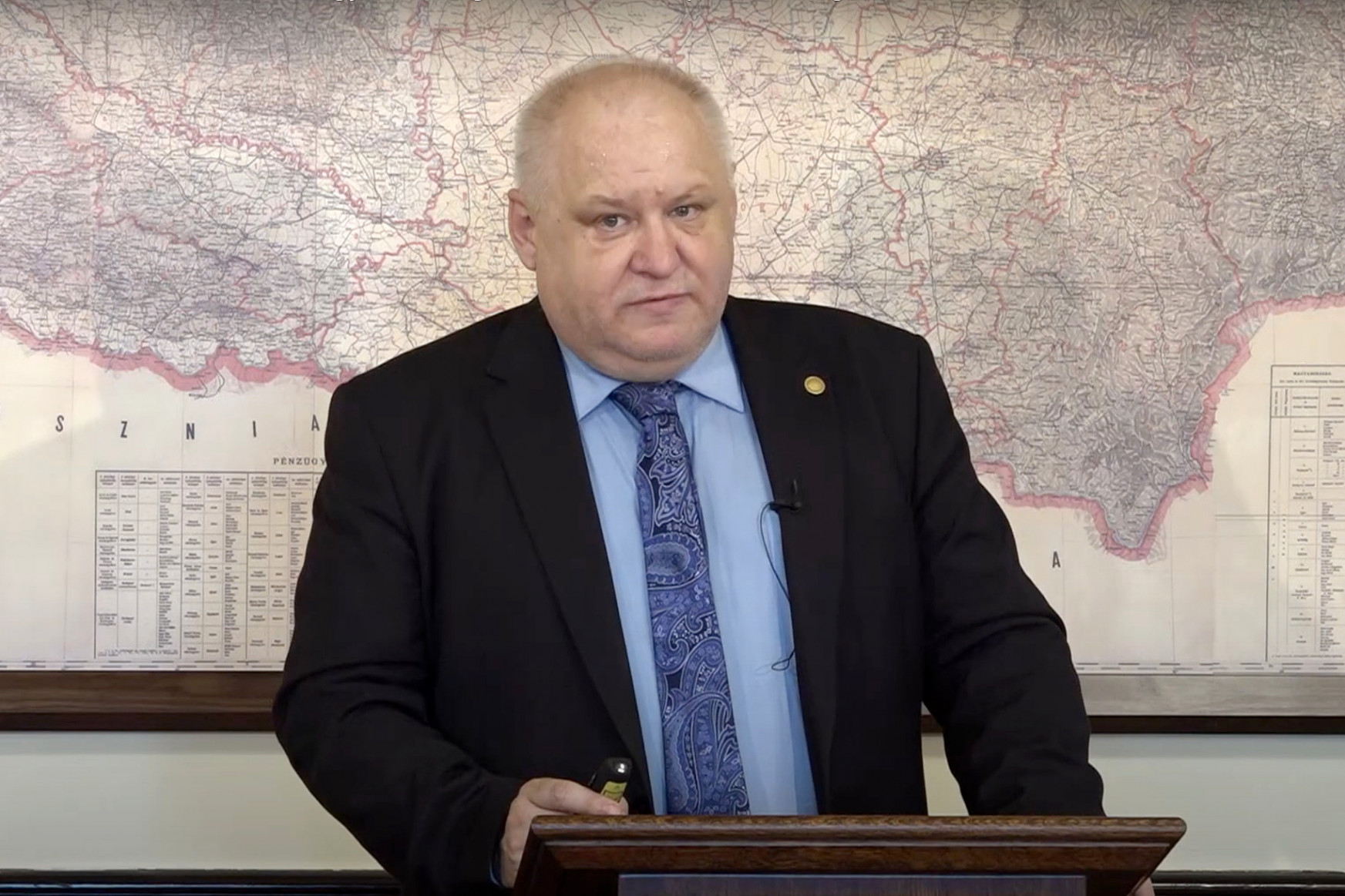 An investigation has begun into obscene, sexist and racist statements by the Hungarian lecturer László Gulyás following student complaints. The students said that the professor in Szeged University, in southern Hungary, has been known for years for such displays. While some people might have found his foul-mouthed style appealing, others saw his lessons as a form of disaster tourism, where he talked about niggers, the plan George Soros is hatching to destroy nations, and unlucky politicians being ensnared by the mouths of women. Some students have come to Gulyás’s defence, saying you don’t have to agree with the lecturer, and that to make a complaint against him marks the appearance in Hungary of a cancel culture that prevents the clash of conflicting opinions. Translated by Charles Hebbert

“After the first lesson a lot of people dropped the course. I continued because I simply didn’t believe that this kind of thing could go on in the university,” said one student who was taking the course entitled Migration and Refugees from the 20th Century to the Present Day at Szeged University (SZTE). (You can read more about the investigation against Gulyás here.)

“It’s not a simple topic, and I was interested to know how a history professor saw it,” said the student, who asked to remain anonymous. At the first lesson Gulyás, who was awarded the Knight’s Cross of the Hungarian Order of Merit on March 15, introduced himself as follows:

“I must tell you that I am a white, hetero Christian man. Sometimes I’m racist, sometimes I’m sexist. You can drop the course if you don’t like this. I don’t care if everyone drops this class and next week I am all alone here.”

In subsequent classes the students heard the following:

The student said that Gulyás had a chatty, entertaining style. “All the same, what he says in his lessons is unbelievable. But in some circles he is popular” — as is apparent from the reaction to his nigger-Jewish joke.

“The university is giving credits for this when I could be listening to top-level lectures on other subjects. It is not fair on the others if someone pollutes the university like this,” said the student, who had heard Gulyás often talking about his high-ranking Fidesz connections, who he talks to at the annual Fidesz gatherings in the village of Kötcse and what a good friend Miklós Kásler, the Minister of Human Resources, is. (Gulyás is also an adviser to the nationalist-inspired Magyar Research Institute, which Kásler set up and which recently produced an animated film of dubious scholarly value about the Battle of Pozsony/Bratislava in 907.)

Gulyás, who has been teaching at the SZTE and its predecessor since 1996, was voted lecturer of the year in 2003 by the students. (For 20 years he taught management studies in the Engineering Faculty.) He became a teacher in the Gyula Juhász Teacher Training Faculty and his portfolio of subjects expanded to include, according to his profile on the university website, “Minorities in Central Europe, Trianon explained, Migration and Refugees and Central European conceptions”.

It was not just 18 years ago that he was popular: there are some who think that the views he expresses in his lectures are acceptable and that they should be tolerated even if we do not agree with them. Several dozen students signed a petition in defence of Gulyás that they addressed to the dean of the teacher training faculty.

They argue that it would be a dangerous precedent if a western-style cancel culture were to take root in Hungarian higher education, suppressing all opinions that differ from the mainstream. Universities cannot be safe spaces; they must give space to the kind of opinions that offer the opportunity for conflict, as they do in Gulyás’s classes.

“I attend his classes because of the conversations and the debate,” said Viktor Fülöp, a student. He believed there were students whose sensitivity was offended by some of Gulyás’s statements, but he thought that should be sorted out within the university, without greater publicity.

“There were arguments. The teacher never hid the fact of his right-wing views. I spoke out in his lessons according to my liberal beliefs and that was never a problem,” said Fülöp, who is a third-year student. He said that in the written complaint to the dean it had mistakenly been stated that Gulyás had treated him condescendingly because of his Roma background. “I don’t come from a Gypsy background but the teacher knows the way I talk. When I put my hand up, he said ironically, ‘Well, tell us Viktor’ — not condescending at all.”

The student felt that Gulyás was the kind of frank teacher that students are happy to chat with over a beer, unlike many of the others, even the twentysomething embittered assistant lecturers.

“Once, I went into one of his classes in a pink hoodie with a yarmulke on my head. The teacher asked what the outfit was, and I said it was a little cultural colour. We laughed and continued the class.”

Fülöp thinks that anyone who enjoys drawing-room bigotry can have a good debate with Gulyás.

“Obviously I don’t agree with some of his boorish comments but even those are up for discussion in class,” said Fülöp, although he recognised that of the 30-40 students in an online class only 3-4 took an active role.

Fülöp believes the whole story is a bone for both the left and right, giving everyone a chance to pronounce on the dangers of silencing other opinions while ever deepening the political trenches.

“We are 20-22 year olds, we are adults in a serious university. This is an optional discussion class. Let’s have enough critical sense to be able to decide which narrative we prefer.” That is why he started the petition to the dean in defence of Gulyás and got 13 others to sign it.

According to Fülöp you don’t have to parrot the teacher’s views on Miklós Horthy’s foreign policy to get top marks in the exams.

A student sitting an exam on migration had a different experience. In the section on the causes of migration, a good answer, based on what was said in class, would need to include “Merkel’s bungled refugee policy”, “the Middle East oil sheikhs’ conspiracy”, “the deep state and the freemasons”, the secret service organisations” and the Soros plan.

The Soros plan is the world conspiracy by the Hungarian-born financier, the ultimate goal of which to set up a world government. The aim is to end nations and let millions of migrants to create a “black Europe”.

The Central European University (CEU) mustn’t be left out either.

The CEU helps to realise this aim by “producing an intellectual elite that will overthrow Orbán and take over power.”

“The atmosphere in the class didn’t allow for other opinions. Any dialogue on so far as it went was with those who offered approval as extreme right wingers. It was more like a political meeting than a university class. Civil organisations were also an object of abuse. I don’t mind if someone wants to open a fascist club and says such things to an audience that has come to hear them. But it is especially dangerous in a university, especially if a trained teacher is addressing students this way.”

We made requests in writing and by phone for comment from László Gulyás, but he did not respond. However, he did give a fuller response to what had happened online in an internal forum for university students and teachers:

“Idle rumours have reached me that some of my students do not like the world view on which I based my migration class. Apparently they have reported me!!! Such shifty behaviour disgusts me. Reporting teachers for their world views is reminiscent of the worst communist times. This is what the young communists did under Stalin and Rákosi.”

Gulyás wrote that it is not compulsory for his students to agree with him, they can accept or reject what they hear according their own values, but “as a teacher bearing national, civil-minded conservative values I refuse to let any student call into question my values”.

The dean of Gyula Juhász Teacher Training Faculty, András Döbör, said earlier in reply to Telex’s questions that an internal investigation began in March in response to a student complaint about the lecture on February 17. The investigation will be completed by April 17, after which the SZTE will announce its findings.