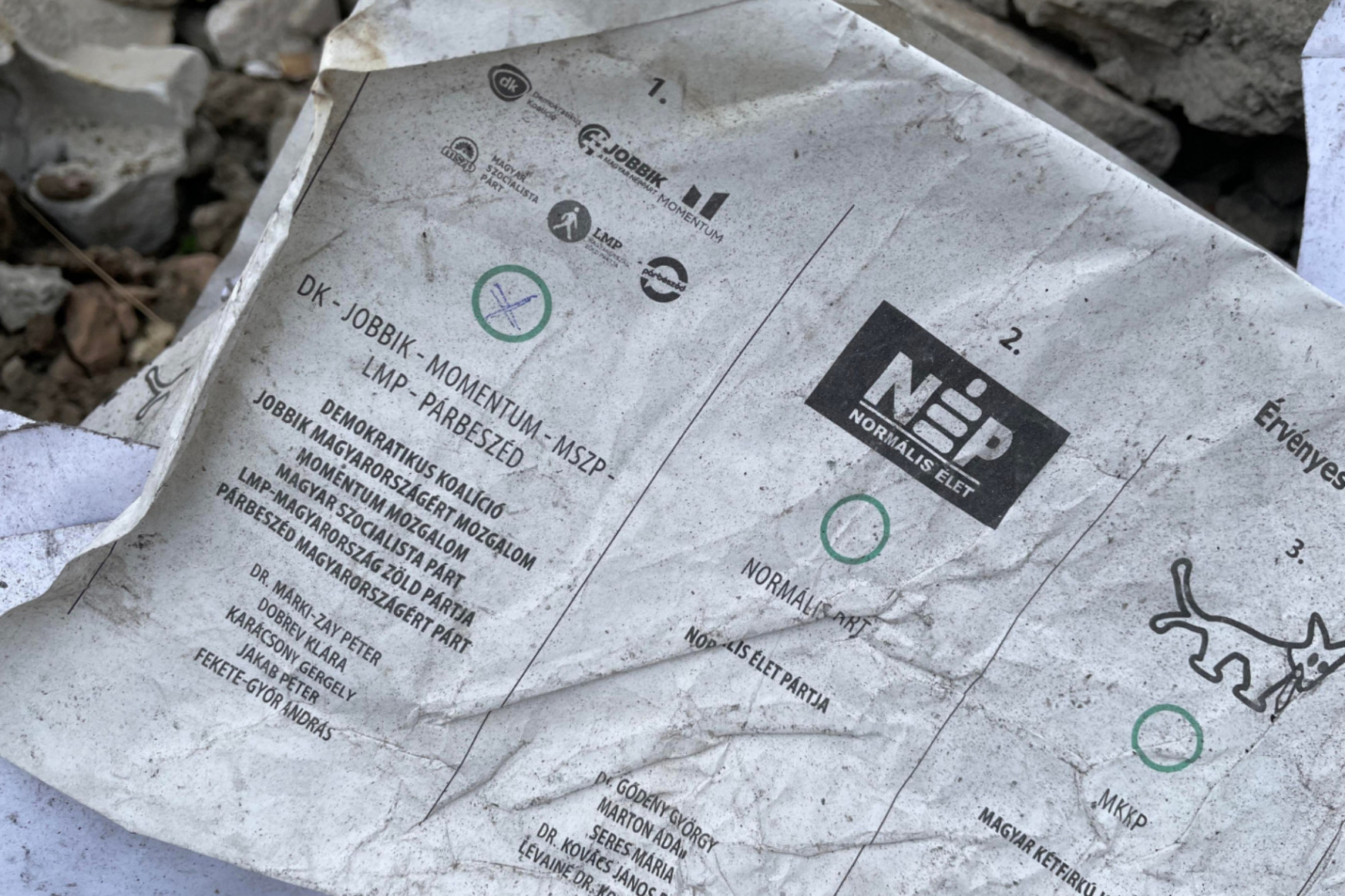 An entire sack filled with thrown out and partially burned Hungarian election ballots was found at a landfill near Târgu Mureș, Romania. A report from our colleagues at Transtelex.

A large number of election ballots for the upcoming Hungarian elections were found on Wednesday at a landfill, near a road connecting the Romanian town of Târgu Mureș with the town of Jedd. The empty lot had been used as an illegal landfill, and the ballots – some of which had been burnt – were found in a sack among piles of construction waste.

An anonymous reader had telephoned Cristian Teodorescu, the journalist of the local punctul.ro/pontmaros to inform him about what he had found on the edge of town, and even sent a few photos. After the journalist went to the scene and took a few photos, it became clear that these ballots have already been filled, and in some of them it is also clearly visible who the vote was for. On one of them, the X marking a vote for the united opposition can be seen, and on the other one, the voter cast their vote for “Mi Hazánk”.

Transtelex asked Cristian Teodorescu about this, and he said that he did not touch the sack, he left everything exactly how he had found it and immediately informed the police about the case. He has no information about whether they had already been to the scene – nobody has contacted him with further questions. So for now, there is no information about how and under what circumstances this sack ended up in the landfill, and the number of ballots it contains is unknown as well.

All Hungarian citizens who registered to vote by 9 March, 2022, can vote via mail until 3 April in the Hungarian parliamentary elections.

The police is at the scene

Meanwhile, the Târgu Mureș police department has arrived at the scene, and the staff member from punctul.ro, who was the first to publish the news is also present, having made the following video recording:

The police collected the opened mail-in votes, and gathered the marked, crumpled up ballot pages into sacks – these will be used as evidence. Boróka Parászka, a journalist based in Târgu Mureș reports that "in addition to the paper ballots, charred scraps of paper and ash were also collected in bags. It is not yet known how many ballots were found, or how many were burned or may have been burned."

Since the votes collected from the Szekler region are sent to the Consulate General in Ciuc, and from here they are forwarded to Hungary by consular courier, we tried to contact the organisations which might be involved in the case: The Târgu Mureș Center for Democracy, the Mureș county body or RMDSZ (Romanian Hungarians’ Democratic Union), the Târgu Mureș police, as well as the Consulate General.

Anna Szente, head of the Târgu Mureș office of the Center for Democracy has answered by saying that the sealed envelopes handed in at the office are counted, bundled and delivered to the consulate in Cluj daily or every other day by a staff member of the Center for Democracy. A written record is made of the shipment, and upon arrival, the consular staff confirm that the shipment was in order. There are between 2-3 thousand mail-in votes collected daily in Târgu Mureș, and so far, they have not encountered any disruption in their transportation. A shipment was sent out from their offices to Ciuc on Wednesday morning as well, but they received the confirmation that it arrived without issues.

We have also contacted the Consulate General in Ciuc, but were unable to speak with the Consul General, László Tóth. His colleagues informed us that he was busy. They asked Transtelex to send our questions in an email. As soon as a reply arrives, we will publish it.

The Mureș county RMDSZ (Romanian Hungarians’ Democratic Union): RMDSZ is not involved in this incident.

We were not able to reach Ferenc Péter, the Mureș county president of RMDSZ. Mihály Levente Kovács, Vice-President of the Mures County Council was the one who finally answered Transtelex’s questions, and said that they found out about this case from the press.

However, the Mureș county RMDSZ is not affected by this story, given that up until now, they have had no issues with collecting the mailed-in ballots, and everything has been going smoothly. He added that they guarantee the safe delivery of postal votes to the consulate, where the staff of RMDSZ will place each ballot in the ballot boxes “by hand”.

“Until now we have already collected a few thousand mail-in votes. We forwarded 6200 votes to the Consulate General in Ciuc on 25 March, and since then, a few thousand more have arrived. – said Kovács summarizing the data from the past few days.

The vice president of the county council emphasized a few times that RMDSZ is a reliable partner in the operating of the postal vote system, and that he continues to encourage those who have not sent in their votes yet, to send them to their local RMDSZ offices, because their package is “guaranteed to reach its destination”. He also expressed hope that the police investigation will find the culprit, given that he is absolutely sure that RMDSZ has nothing to do with this incident.

The opposition’s prime ministerial candidate reacted to the news in a Facebook post: “Now we caught them: thrown-out election ballots were found in Transylvania, in a landfill near Târgu Mureș.

We have always known that they are cheating in the elections, but now everyone can see the methods they are using. It seems that even in Transylvania, more and more people agree that Fidesz must go. And they are so terrified of losing, that they are not afraid even of the most obvious fraud: they literally wanted to make rubbish of the will of the electorate. – Márki Zay writes.

“The desperate left is capable of all vile deeds – reaction to the left’s accusations about election fraud” – is the title of the Fidesz statement issued in response to the news from Romania. “The left is capable of anything in their desperation. They are committing the most serious electoral fraud since the Hungarian regime change, using the completely illegal DatAdat database of Bajnai, and now they are attempting to get the votes of all Hungarians living in surrounding countries destroyed. There are no two left sides, only one: the Gyurcsány-Bajnai left is capable of the vilest of things. In 2006 they tried to burn down the national TV station to stay in power, and now they are burning voting ballots” – the statement says.

According to TASZ, this news about the mail-in ballots having been thrown out is the most serious abuse of the postal voting reported to date. They write that “the current system of postal voting is not capable of ensuring the uninfluenced, secure and free exercise of voters’ rights.

If proven, the current fraud would be equal to denying some voters access to the polls on the basis of their political opinion.

This parallel is also true from a criminal law perspective, therefore we are filing a complaint for an offence against the order of elections."

To stay up do date on news related to Hungary, don't forget to subscribe to the Telex English newsletter!