Our report from Kherson: „The Russians did everything they could to teach us to be afraid" 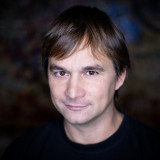 With the liberation of Kherson, Ukraine regained the biggest town captured in the almost nine months of the Russian invasion. Russian forces withdrew from the town of 300,000 on 11 November and retreated across the Dnipro River. The recovery of Kherson is thus not only emotionally important for Ukraine, but the fact that the Russian forces were forced to retreat is also strategically significant. Life is slowly returning to the southern Ukrainian town, but severe shortages remain: there has been no electricity or water for weeks, gas supply is only sporadic, restoration being especially urgent as winter approaches. But this is made more difficult by the continuing threat of artillery attacks by the retreated Russian forces. This is our report from Kherson.

Get drinking water. Charge the mobile phone at the train station or in the main square. Find a place to get warm – these are some of the basic things to do on a typical day in Kherson these days. In spite of this, the southern Ukrainian town is not overcome by a sense of deprivation, but by a sense of relief after the occupying Russian forces left after almost nine months in the area.

Clamouring children and a humanitarian disaster

Things that would normally be just part of everyday life are also signs of this relief: the first trains from Kyiv have arrived, there are people in the streets, cars on the roads. Crowds gather in the main square every day, simply to talk: to each other and on the phone, to those with whom they could barely communicate during the occupation.

"For a while there was Ukrainian mobile phone service, but after a while only Russian SIM cards worked. Internet use was also easy to trace, so I used it carefully," Alexey tells us.

"The Russians did everything they could to teach us to be afraid", says the 40-year-old man who came to the square with his brother. "Whole districts were empty, people were sneaking under the gardens to stay out of sight," his brother chimes in. Oleg's words sound strange as we stand in Liberty Square, with the noise of children running around the monument behind us, now once again decorated with Ukrainian flags.

That the picture is not quite as idyllic is indicated by the food distribution nearby and a water distribution-point down the street. The former is chaotic, the latter quietly comes to a pause when it is announced that the water has run out for now. In the middle of the square are two heated tents: both are heated and people can charge their phones.

A little further away, Ukrainian SIM cards are being distributed to finally re-establish the connection between the retaken Kherson and the rest of the country. And of course, in the background, there is the steady roar of artillery fire, although the locals’ reactions reveal that everyone is used to it by now.

"You cannot imagine how terrible it was. They could take you in for anything," Oleg remembers the occupation. Wearing a small blue and yellow ribbon was a pretty clear statement in favour of Ukraine, but

one could also be detained for making a phone call in the street if the Russian patrol decided it seemed suspicious.

A friend of Oleg's was shot dead in the street during the first days. "He was simply heading home. He even called home to say he had been stopped at a checkpoint, and then it was over." The 35,000-strong Russian force deployed from Crimea, which was annexed by Russia in 2014, faced just 15,000 Ukrainian troops, so they were in control of the city and most of Kherson county by 3 March.

The occupied city did not give itself up easily

Although the Ukrainian army gave the town up quite quickly at that stage of the fighting, the people of Kherson were slow to give up hope: the town was still buzzing with protests for a month afterwards. Locals marched in protest of the occupation, walking among Russian soldiers and armoured vehicles, carrying yellow-blue flags – until the unarmed crowd was met with tear gas and then guns, first firing into the air and then into people.

The last demonstration was on 29 March. By this time, several of the more active demonstrators had been detained by the occupiers, many of them taken from their homes, their activities having been tracked.

“We saw those who had been in the occupiers' detention. Their bodies were not just blue from the beatings, they were black.”

Because it was captured quickly, Kherson was spared the clashes – it wasn't as badly damaged as Kharkiv, which the Russians had unsuccessfully besieged, let alone Mariupol, which was almost completely destroyed. The front soon moved further west – though it stopped at Mykolaiv, so the Russians could neither push north towards Kyiv nor west towards Odessa.

Instead, the ideological work on the captured Kherson territory began: Russian broadcasts were turned on, Ukrainian TV was muted, community and news sites were blocked on the Internet, billboards appeared on the streets: 'Russia will always be here', 'Ukraine and Russia are one people', and even more practical promises such as 'free medical care'. Then came the poster calling on people to vote in the referendum with a huge 'yes' on it.

There are only fragments of these left on the streets by now. After 11 November, they were torn down, or at least "redecorated". Although the Russians held a 'referendum' – and in October the Russian parliament officially declared Kherson province a part of Russia – just six weeks later, they left the city and the right bank of the Dnipro river.

They left so fast, it looked like a trick

During the occupation, the infrastructure was handled according to the previously seen scenario: they disconnected the city from its previous sources and switched to Russian or already occupied Ukrainian sources. Then, when they could no longer hold their positions – just like in the Kyiv area in the spring, in the Kharkiv region in September, and in Kherson in November – while balancing between flight and organised retreat, they destroyed the infrastructure, leaving the city without water, electricity and gas.

"I don't care how long we sit in the dark if we can use the money we save to launch missiles against the invaders," Dmitry says by the light of his mobile phone. We're staying at his place overnight under curfew. While we talk, the sound of heavy artillery can be heard in the distance. The piped gas is already working in this part of the city, so at least he's replacing the heating with an iron pipe on the stove, since the heating system he had originally built is electric.

The 65-year-old man grows vegetables and has survived the last few months on his savings. The rest of the family left town in the first weeks of the occupation – there was a risk, but for a while it could still be done, towards Mykolaiv and then through Odessa.

Dmitry was born far from Ukraine, across the Ural Mountains. Neither his Russian mother tongue nor his family roots mean that he does not feel Ukrainian. But he did not believe that Russia would attack Ukraine in an all-out war – even though it had already done so in 2014 during the seizure of Crimea with support from the separatists in eastern Ukraine.

He greeted the withdrawal with jubilation but disbelief.

"Even when our troops arrived, I feared provocation. I feared they were just Russian soldiers in Ukrainian uniforms."

- here to assess who among the civilians are openly pro-Ukrainian.

It took a day or two for everyone to believe that the Russian soldiers had really left. They crossed the Dnieper, partly by ferry, and then blew up the bridge at Antonovka. "It’s called a negative offensive," Dmitry said ironically, referring to the Russian propaganda, which still refuses to admit Moscow's military failure.

(Subtitles available for the video below)

They wanted to push us back to the 17th century

The Dnipro is now effectively the front line – although the artillery attack from the Ukrainian side is more intense at the moment, so the Russian forces are decreasing their presence along the bank, having moved 6-7 kilometres further away in several places in recent days.

"We're lucky to have the Dnipro," a grandfather told us. He had gone to the embankment with his son and grandson to get some water. Most people fetch the water they need for their household from here now, carrying 20-50 litres home in bottles every day.

"We haven't had water for two weeks...but we are happy," a woman who came to the riverbank with her husband said. The Russian forces destroyed everything from TV towers to infrastructure after the withdrawal, and are still not far away, they are just across the river.

"They wanted us to see: with Russian peace you have water, electricity, heat, but if you want Ukraine, you will have nothing. They used to tell us that they would push us back to the 17th century.

Nevertheless, we are holding on, everything will be fine. The most important thing is that we were and are Ukraine again. We are free."

- he said, also explaining why people protested for so long against the occupation in what is otherwise a largely Russian-speaking region. It was for these linguistic reasons that Moscow saw this region as a potential ally, thoroughly misinterpreting the link between language and nationality.

"Fear and uncertainty were the most difficult. Not knowing what would happen to you when you stepped out on the street, knowing that you might never come home again. We had no rights, and they were walking around like lords," she said.

Her words echo what most Ukrainians say when they have to distinguish between Russians and Ukrainians. The brief summary is as follows: if we have to, we protest, we take to the streets. We did it in 2004 and 2014. We elect a new president in the elections, which is something they simply don't understand in Russia.

"What should I expect from them, when they even took my dishwasher?" – a man in the main square asked. Then, he used his mobile phone to show what was left of his apartment, where Russian Federal Security Service (FSB) agents lived during the occupation.

Nikolai, aged 40, has just returned to the city, but he says he is back for good, he's renovating his apartment bit by bit. His friend, who works at the waterworks was in town through the entire occupation and has no doubt that the episode of the Russian occupation of Kherson is over.

"If we keep getting weapons, our guys will drive the Muscovites out of here. Those who bought into the Russians' spiel and accepted their passports have already left with them. It's too late for them to regret it now. Either way, we'll defend our town, I'll die if I have to, but the Muscovites are not coming back here ever again.”