Opposition voters do not share their parties' pro-Ukraine stance 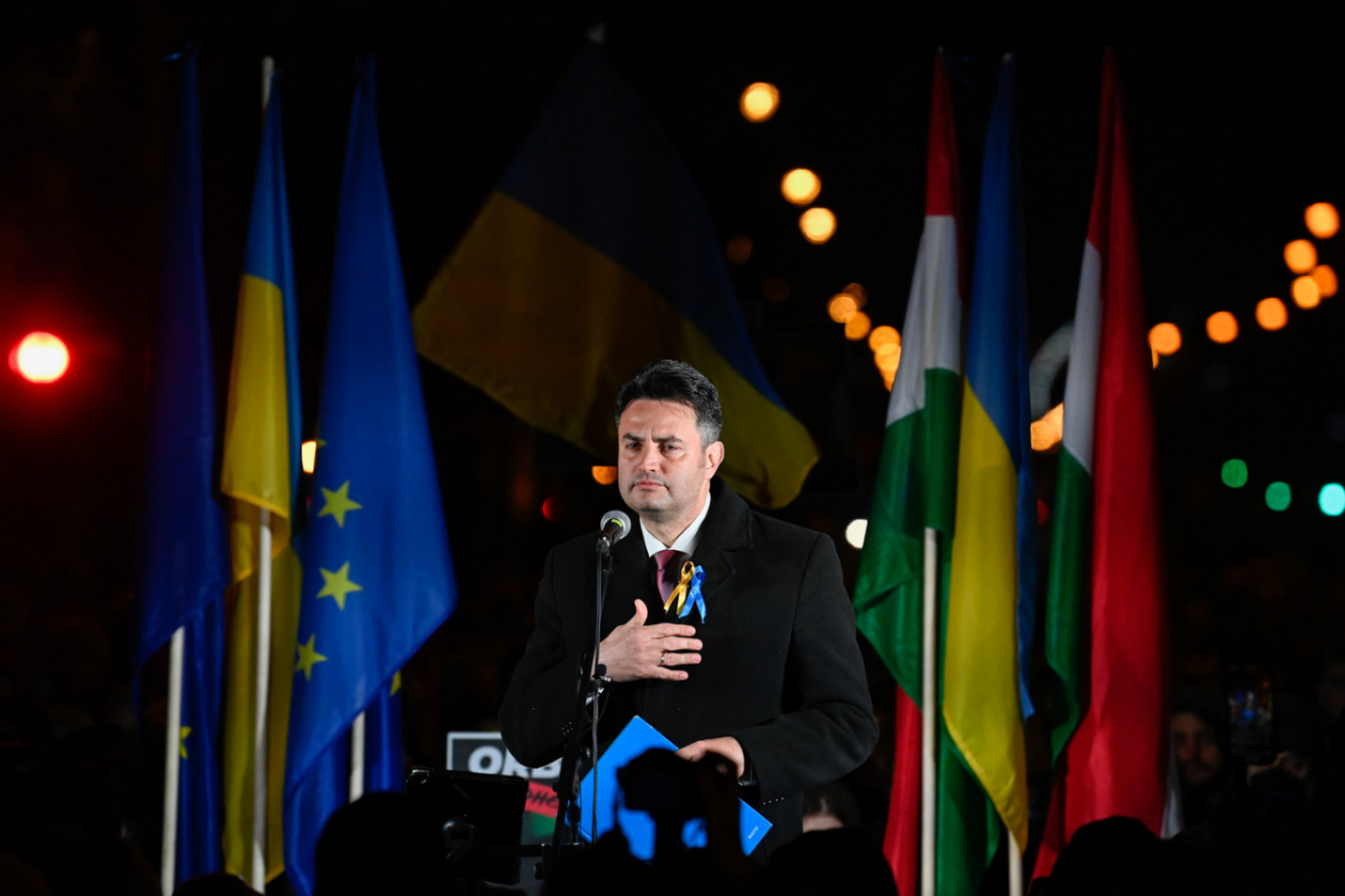 Péter Márki-Zay speaking at a protest against Russia's invasion of Ukraine, in front of the Russian Embassy in Budapest on 24 February 2022 – Photo: János Bődey / Telex

A survey done by CEU’s Democracy Institute following April’s elections found that while the EU finished first among the countries which are most liked by Hungarians, Russia is the least likable, and Ukraine the second least likable country among Hungarians. Fidesz voters tend to be more critical towards the EU, while those in favour of the opposition feel this way about Russia. Those whose vote in the April ‘22 elections was influenced by the Russia-Ukraine war tend to lean towards Russia. Hungary seems to be unique in Europe in that the more one identifies as a right-winger, the more they support Russia’s politics.

Medián’s research conducted at the end of April already revealed that Ukraine and Russia are both quite negatively perceived and judged by Hungarians. The Fidesz-supporters’ anti-Western and especially anti-American sentiments, as well as the opposition’s followers’ anti-Russian sentiments are also clearly visible in the results. The data collection which followed Medián’s research by just a few days, and which was conducted by Závecz at the request of CEU’s Democracy Institute confirms this picture.

The survey was conducted by Závecz Research between 25 April and 4 May 2022, interviewing 1,000 people. The survey was carried out in 103 municipalities and districts of Budapest, and the respondents collectively represent the adult population of the country by gender, age, education, region and type of municipality. For random samples of this size, the margin of error for the basic distributions of all respondents is ± 3.1 percentage points. In this case, due to the fact that sample-selection combined quota logic and randomness, the margin of error is somewhat bigger.

As compared with the Median survey, the UK and France were left out of the current project, while the EU, Poland and Israel were included.

The specific question was as follows:

How likeable do you find the politics of the following states and organizations?

In the total population, the EU came out on top. Germany, Poland and the United States of America landed in the middle, while the bottom three were Israel, Ukraine and Russia. In other words: public opinion is quite pro-European, without any signs of enthusiasm.

Both those who voted for Fidesz, and those who chose the opposition at the April elections placed the EU in first place. This is somewhat surprising given the government’s many bouts with the EU, but when interpreting this, we must also consider the fact that Hungary is part of the alliance. The two camps are also convergent in placing Israel, Ukraine and Russia at the end of the group of seven.

This means that the opposition’s strong pro-Ukraine stance was only marginally shared by their voters.

It certainly is thought-provoking that the two camps’ attitude towards Israel, Poland and Ukraine did not differ significantly, in spite of the fact that all three countries have often played a role in arguments between Hungarian parties, and in the conflicts of intellectuals. But when it comes to the voting masses, neither seems to polarize the two camps.

There are significant differences, however, in how Germany, the United States, Russia and the European Union are viewed. While the latter is the least rejected organization by both camps, it is the most divisive international political factor:

It is worth examining how country sympathies are related to one of the more important aspects of party choice, the desire to "stay out" of the Russian-Ukrainian war. We offered 15 criteria which may have affected the voters’ decisions in April, in the form of closed questions.

41 percent of respondents gave the war as their first or second most important criterion, preceding any other explanation offered.

Somewhat surprisingly, those who explained their party choice with a reference to the war did not view the politics of Ukraine differently than the average. In the case of the EU, the USA and Russia, however, the difference was significant. Those who justified their vote with the desire to stay out of the war showed more sympathy towards the politics of Russia than the others and had a more negative view of the EU and the US.

It is not very likely that the war in itself – which even the pro-government media agrees is an aggression of Moscow – made Russia more likeable and the EU and the USA less so. It is somewhat more likely that, on the one hand, the more anti-Moscow and pro-Western opposition citizens may have felt that the threat of getting involved in the war was false, while the inherently more anti-Western and more pro-Russian Fidesz voters considered the anti-war narrative a good framework through which to interpret their party choice.

The more right-leaning a voter is, the more likable Russia is for them

The degree of the politicization of foreign policy orientations is also indicated by the correlation with left-right identification. The more right-leaning someone is, the more negative their attitude is towards the EU, the United States and Germany, and although to a lesser but still to a statistically significant extent to Israel. On the other hand, these voters’ opinion of Russian politics is more positive than the opinion of the left-leaning voters.

While this pattern is not unexpected, it is worth noting that we find in Hungary the exact opposite of the traditional setup still observed in most Western-European and Eastern-European countries.

The data shows that the above configuration is a purely “political product”, in the sense that the attitude towards a particular country has nothing to do with education, age or social class. In spite of this, it does not necessarily follow that these orientations are unstable and can easily be “reprogrammed” at any time.

The example of Jobbik has shown that not all voters follow the changing guidelines of the party elite, even when the party's rational interests justify the change. Of course, it is more likely that Viktor Orbán will continue to be able to influence his followers and adapt his electorate's foreign policy preferences to his strategic interests.

He has transformed his camp from Western to Eastern orientation with exceptional efficiency over the past decade or so, and will continue to be able to use his persuasive resources and talents to make future adjustments. On the other hand, it is important to note that we have not yet seen an example of a general political orientation being reversed.

Undoing the scrambled eggs and taking his camp from being East-friendly back to approving of the West, now that would be the real magic!

About the authors: Andrea Szabó is a sociologist and political scientist, and Zsolt Enyedi is a professor at CEU's faculty of political science (Vienna) and a researcher at CEU's Democracy Institute (Budapest).

For more quick, accurate and impartial news and analyses from and about Hungary, subscribe to the Telex English newsletter!