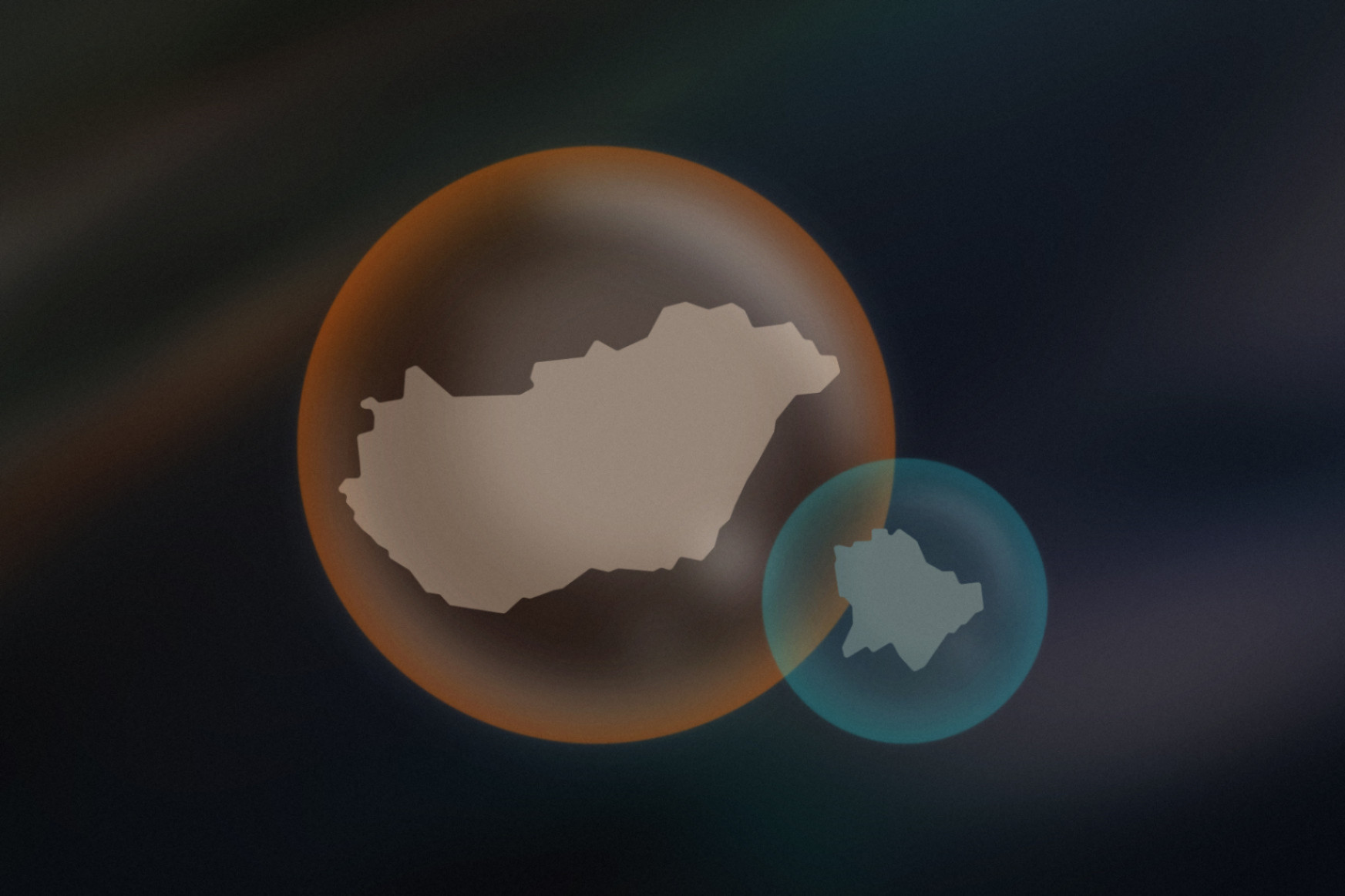 In spite of all previous research and analysis results, the result of the 2022 results was in no way close. The current numbers – without the mail-in votes and those that were submitted at embassies – Fidesz will have 135, the united opposition 56, and Mi Hazánk 7 MPs in Parliament, with 1 representative of the German minority who has a tradition of voting with Fidesz.

Realistically, the embassy votes might only change the result in favour of the opposition candidate in one constituency (the 13th in Budapest), but it can nevertheless be stated: The Fidesz-KDNP coalition lead by Viktor Orbán has won with a two-thirds majority of the votes, and it once again has a constitutional majority.

There was hardly a part of the election in which Fidesz didn’t beat the six-party opposition coalition by miles (we will reflect on Budapest in point 5). Fidesz won 88 out of the 106 constituencies, while the opposition won in 18 (only two of which are outside of Budapest.

When looking for the reasons, the first one is obviously the fact that the teams did not take to the pitch under the same conditions. Fidesz was lightyears ahead of the opposition in resources, organisation and cohesion.

It was – among others – for the above reasons, that the OSCE observers determined that “the two sides did not have equal opportunities”.

On top of this, the Fidesz campaign machine has worked together at a number of elections before, and did well again after applying their consciously built-up mechanisms. On the other side, the opposition had to put together a campaign team representing six parties and Péter Márki-Zay as the seventh at the end of last year – which, according to leaked information, did not go without tensions.

As politologist Gábor Török put it when comparing the two campaign teams:

“You have a professional force which has been in leadership for 12 years playing a team of amateurs. On the one side you have a factory of power with a well-built media system, and on the other side uncertainties and counter-interests.”

And these are still just the conditions under which the campaign started. We haven’t talked about the rules of electoral procedure which favor Fidesz – these would be significant in case of a closer result.

This election has proven that any oppositional grouping has little chance of defeating Fidesz until it finds a way to counter such a strong Fidesz advantage. Telex has written about this in detail before.

Looking back at the previous term, one need not be cautious when saying that the government had to face a series of nightmarish events.

In other words, the opposition (would have) had ample ammunition and subjects to bring up against the government which would have been unpleasant for the ruling party. Orbán, however continued playing his politics in a way which ensured that his preferred narrative was first to reach the electorate, and he managed to push the opposition into a position which undermined their popularity.

Some of the extreme examples that come to mind are for example that according to the government’s narrative, the opposition is on the side of the virus, or that the opposition wants war.

Even towards the end of the campaign, the government did not shy away from such murderous smear campaigns as to identify opposition MPs with the war itself.

The reason why this matters is that society clearly responded to the crises, and was continually drawn to stability and security. It probably helped Fidesz’ result that the six-party, united opposition kept arguing and sending each other public messages, and as their prime ministerial candidate wanted to establish a seventh party, they were unable to convince the voters that their governance would mean stability for Hungary. For this reason, the country did not want to switch leadership in the midst of a war going on near us.

Other than the basics which were a given, and the topics which came up during the campaign, there are also organisational reasons and lessons to be learnt from the victory of Fidesz and the brutal defeat of the opposition. Joining forces in this form did not work for the six parties which worked together. The opposition had participated in various ways in previous elections: in 2014 they all ran separately, in 2018 they formed separate lists, but supported each other in a number of single-member constituencies. They had high hopes for this year’s complete joining of forces (which were not unfounded following the 2019 municipal election results), yet their results were still the worst ever when it came to list votes.

None of the research predicted an 18-point Fidesz advantage, and the reason for this is that compared to the 2018 numbers, the opposition has lost almost 900 000 voters. Based on the numbers, about 300 000 voters most likely sided with Mi Hazánk, the others went to Kutyapárt (The Two-Tailed Dog Party), Fidesz or others.

All of this means that the central force field which seemed to be breaking up in 2019 did not in fact do so – but it came to new life in a new setup. Mi Hazánk getting into parliament means that Fidesz will now have an opposition on the right (the far-right) as well, and not just on the left, but it is important to mention that these two sides are incapable of working together. It is with this in mind that the opposition must continue to play politics.

4. The choice was not between parties, but prime ministers

This election differed from previous ones in that in the end it became duopolistic and it was down to the personalities of the two prime ministerial candidates. Last Fall, Márki-Zay started the campaign by saying that the question is simple: Orbán or not Orbán, while Fidesz built their entire campaign machine on the choice being between Orbán and Gyurcsány(s guy).

It can now be said that the opposition's performance in the election of a prime minister was disastrous.

Péter Márki-Zay burst onto the scene of national politics as a complete outsider during the preliminaries. His victory in the preliminary election was neither expected by the opposition parties, nor Fidesz. For a short while (a week or two) afterwards, the governing party wasn’t sure what to do with this, but then they started calling him Gyurcsány’s man too, and analyzing (i.e. twisting) his statements.

The pre-election polls already showed Orbán always looking better than Márki-Zay, and it was clear that many more people think Orbán is better suited to lead the country. The lesson – and the numbers are there to show it – is that voters prefer to vote for individuals rather than party platforms and ideologies represented by parties.

The opposition now needs to reflect on what went wrong, and where they failed when developing the rules of the primary election – with the biggest pitfall of the system probably being that it is suitable for intra-party or inter-party primaries. Although an outsider candidate without party support, Márki-Zay was able to win the primaries, but ollowing his victory, he ended up in a vacuum – partly generated by himself when he brought up the idea of starting a seventh party.

Naturally, those taking part in the primaries also have things to think about: first and foremost, whether it was the right decision to have an openly right-wing candidate run at the helm of the opposition, who even voiced it a few times during his campaign that he would like to do the same thing as Orbán in a number of areas: starting with the capped overhead costs all the way to the fence on the southern border of the country.

5. Budapest and the country are watching a different film

The fact that Fidesz won the national elections is unquestionable. It is, however worth reflecting on the noticeable difference between rural voters and those living in the capital, Budapest. If we compare the election results in rural constituencies against those in Budapest, this is what we see:

Fidesz was able to gain strength in Budapest as well, compared to where they were four years ago, and a few of the opposition candidates had a close call – such was the case with István Hiller, Ágnes Kunhalmi and Balázs Barkóczi, for example.

The country has become visibly divided. Naturally, a more detailed analysis is needed in order to find out what the socio-economical reasons behind this geographical division are.

Back in 2020, the “21 Research Institute” conducted an analysis of the "economic voting", which showed a strong opposition advantage among graduates and those with intellectual jobs (most of them living in Budapest) (47-33 for the opposition), while among those with basic education and doing manual labour, Fidesz had a landslide advantage (48-13 for Fidesz). This dimension may also have contributed to the result on Sunday, especially in light of the fact that this time Fidesz even lost all of the traditionally right-wing districts in Buda.