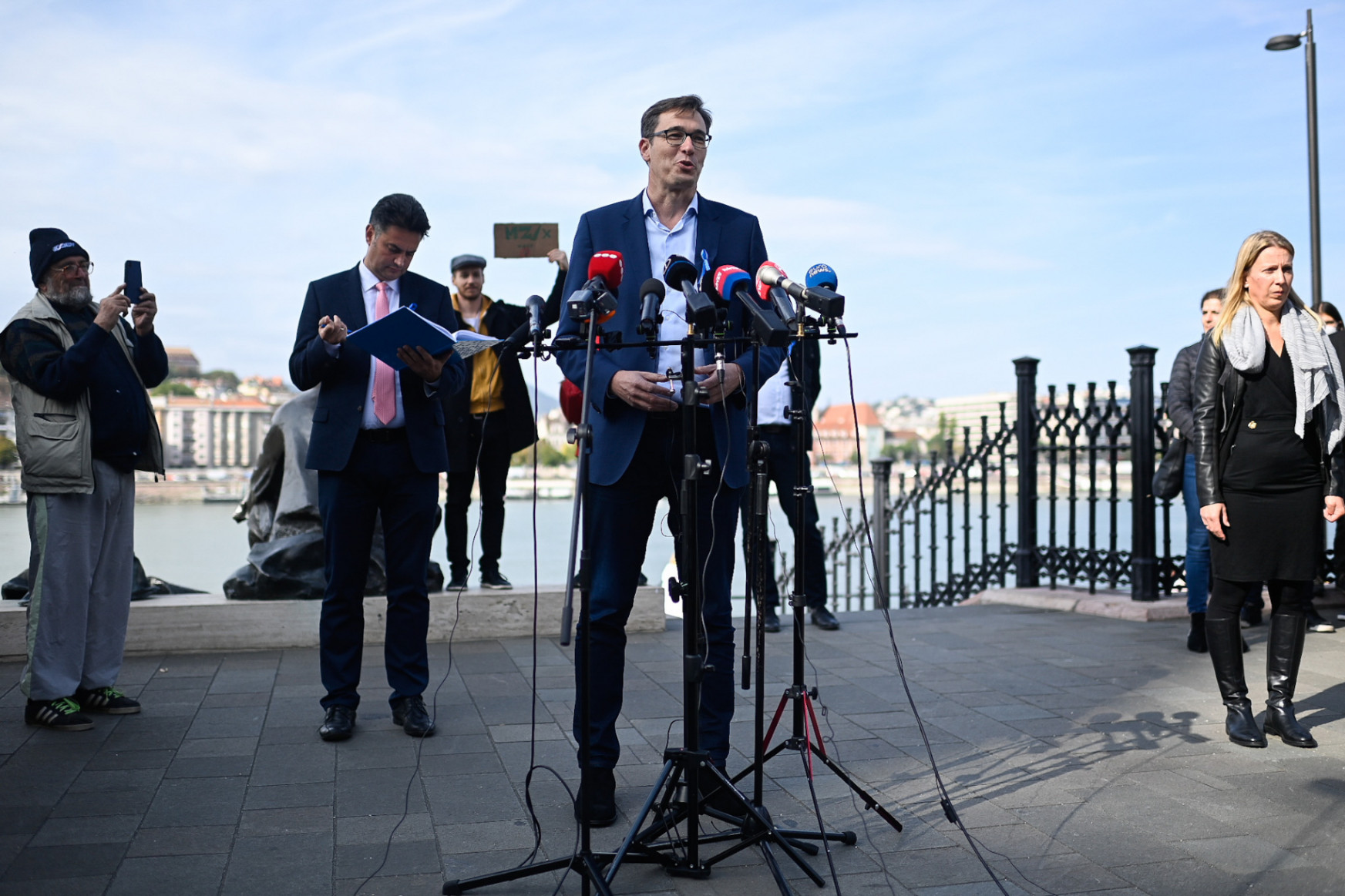 At his joint press conference with Péter Márki-Zay at 11:00 AM on Friday, Gergely Karácsony announced that he was withdrawing from the race to be the opposition's prime ministerial candidate at the 2022 general elections. Karácsony said he is shutting down his campaign with an easy heart, as he fully trusts nonpartisan candidate Péter Márki-Zay, asking his supporters to vote for him in the second round of the primaries.

Karácsony's decision came after a week-long tussle with Márki-Zay. At the first round of the primaries, Karácsony finished before Márki-Zay, but DK's Klára Dobrev beat both candidates. The negotiation process between the Karácsony and Márki-Zay had been rocky, to say the least.

When the first round's results came in, Karácsony told Telex that the only way he would withdraw from the election was if a tram ran over him, while Márki-Zay also held out, with commentators describing the situation as a game of chicken. Both candidates believed that with Dobrev running for the top job, it would be impossible for the opposition to win the elections next year, as DK was founded by former PM Ferenc Gyurcsány, one of the most divisive figures of the opposition and also the husband of Klára Dobrev. As we've seen, eventually, Karácsony gave way.

In his speech at the presser, Karácsony said:

„Yesterday, sometime around 11, I arrived at the conclusion that if I did not take this step, Viktor Orbán would stay in power.”

Karácsony, the mayor of Budapest and prime ministerial candidate of Dialogue for Hungary (Párbeszéd Magyarországért, P), said that he and Márki-Zay agreed that once elected as PM, the otherwise right-leaning candidate would support the left-centrist platform as well, aiding its realization, adding:

„I believe Péter Márki-Zay can unite the opposition.”

Karácsony also said that he was an „unorthodox” candidate since he started his campaign by saying that he does not wish to be a prime minister at all.

Stepping to the microphone, Péter Márki-Zay thanked Karácsony for his support, adding that he has proven „that for him, the interests of his homeland are above everything.”

Márki-Zay claimed that opposition party led by former PM Ferenc Gyurcsány, Democratic Coalition (Demokratikus Koalíció, DK) had also reached out to Karácsony, and if he was interested in his own personal fate, he would have allied with them, and wouldn't have withdrawn from the elections. DK rejected these allegations in a press release sometime later.

„From this point forward,” Márki-Zay said, „Viktor Orbán's only hope can be that DK's Klára Dobrev wins the second round of the primaries.”

Márki-Zay did not only acknowledge Dobrev's performance in the first round but asked for a round of applause for her. He spoke at length about how he became a non-partisan candidate, recalling how he won the mayoral seat of Hódmezővásárhely, concluding that:

„Behind a candidate whom Fidesz cannot touch, we can change Orbán's government.”

Karácsony and Márki-Zay both encouraged opposition parties to get behind Márki-Zay and „become the brave women and men who perform this miracle for Hungary.” Márki-Zay pleaded supporters of DK and Jobbik to keep the country's interests at the forefront, and, „despite all her excellence, prevent Klára Dobrev from turning next year's elections into a duel between Orbán and Gyurcsány,” adding:

Our sources say that members of Karácsony's team are far from satisfied with the decision, leading to the resignation of his campaign chief Zoltán J. Gál. In response to Telex's questions, Karácsony said that money spent on his campaign had not been wasted, „the money wasted was what Fidesz spent on systematically denigrating me for years.”

In press releases issued not long after the press conference, three opposition parties, namely MSZP, LMP, and Jobbik expressed that they would not support any candidates at the second round of the primaries, however, they all stressed that in the campaign for the 2022 general elections, they would get behind whoever ends up winning the primaries.

Youth party Momentum had already declared their support for Márki-Zay on Thursday, party chairman András Fekete-Győr now posted that “Gergely Karácsony made a difficult, but vital decision,” adding that Karácsony will be direly needed in “our fight against the Orbán-regime and in building a new, free, European Hungary.” Dialogue for Hungary, Karácsony's party, is yet to issue a reaction.

DK was upset by Márki-Zay's statements, objecting that, in their interpretation, Márki-Zay said that a vote for Klára Dobrev is a vote for Viktor Orbán, urging the nonpartisan candidate to apologise to their base whom he offended. In response to the claim that the party reached out to Karácsony in order to keep him in the race, they wrote:

“In order to protect the spirit of the primaries, we urge all actors to refrain from making untrue statements. Let's take care of each other.”

The second round of the primaries will start on Sunday, 10 October, and end on 16 October, with results expected in the following days. In the first round, voters had cast 616,512 valid ballots, Dobrev won with 34.8% of the vote, Karácsony came in second with 27.2%, and Márki-Zay finished third with 20.4%. Candidates of Momentum and Jobbik did not make it into the second round as they've failed to hit the 20% mark.