They wanted to steal the project, but I wrote a letter to Viktor Orbán and he made a wise decision 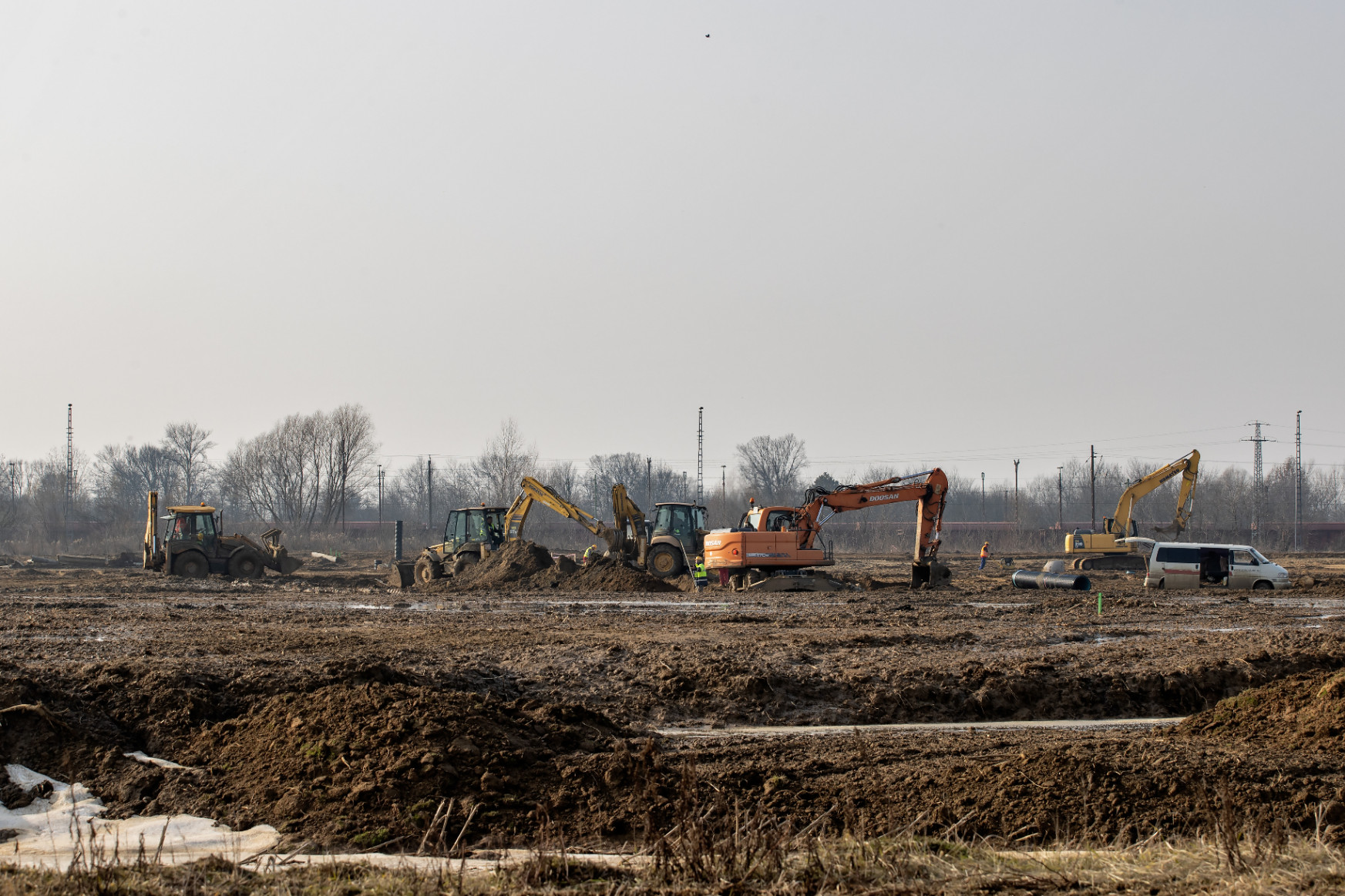 Source: The site of the container terminal next to Fényeslitke is already being prepared for construction – Photo: István Huszti / Telex

One of the biggest container terminals in Europe is under construction in a village near Hungary’s border with Ukraine. Financed mainly by a company belonging to a secretive billionaire, when it opens next year it will be the gateway on the New Silk Road for rail freight coming from China. Translated by Charles Hebbert

The Hungarian village of Fényeslitke, a few kilometres from the Ukrainian border, has been chosen as the site for the East-West Gate, a huge state of the art intermodal logistics centre – one that can handle different forms of transportation. It will be a key point in trade between China and Europe in the future. Work began on the project in January, and completion is slated for early next year.

The New Silk Road, also known as the Belt and Road Initiative, is the geopolitical strategic plan launched by China. It promises energy and digital investments to improve the infrastructure of the developing world, and already extends to several dozen countries. Not everyone sees the project as beneficial. Critics accuse China of spreading corruption, financing dictators, colonisation and buying influence by economic and political means.

“The mayor of Frankfurt came after me, they weren’t small players there,” said Mihály Mártha the mayor of Fényeslitke, after he attended the 2018 Silk Road conference in China, where he was given four minutes to address a highly influential audience.

As its name suggests, the East-West Gate in Fényeslitke would play a vital role in assisting rail transport between Asia and Europe. The two continents use different gauge railways, which is an obstacle for the smooth passage of rail-borne freight Fényeslitke offers not merely a site where freight must be transferred from trains running on the Russian wide-gauge tracks to trains that can run on narrow-gauge European tracks, but one of a size that can handle several hundred thousand containers a year, making it one of the largest logistical centres in the region.

The improved rail links can be explained by the fact that the inner regions of China have developed considerably in recent years. Freight coming by rail on the New Silk Road reaches Europe two weeks faster than cargo brought by sea.

The mayor is enthusiastic because 30 of the 140 employees will be skilled workers. In addition, the project will build its own doctor’s surgery and boasts green credentials. It will rely on solar energy, its heating will be geothermal, 5G-controlled cranes will move the freight and security will be handled by drones.

Furthermore, the man behind the investment is offering supporting to various settlements in the area. In the nearby town of Záhony a logistics training college is being fitted out with a computer classroom. The nursery in Fényeslitke is receiving a skills development game, and the investor has kitted out the whole place with completely new furniture.

The 22 billion forint ($71 million) project is getting a 3 billion forint grant from the Hungarian state, but it is mainly financed by Ruslan Rahimkulov, one of the richest men in Hungary.

Rahimkulov’s father, Medget, came to Hungary as an executive of Gazprom, the Russian energy corporation, and built up a considerable fortune. His two sons, Ruslan and Timur, are among the largest shareholders in two strategically important Hungarian companies, the bank OTP and the Hungarian oil and gas company Mol. An investigative report by the Hungarian financial news website G7.hu revealed how the fortune of Hungary’s richest family developed. Ruslan’s fortune is estimated at 240 billion forints, placing him seventh in the list of rich Hungarians.

It is widely known that the Rahimkulov brothers are not keen on publicity, and there were no photos of them in the Hungarian media until recently, when Telex wrote that it had found one of Ruslan on the Fényeslitke local authority’s website. According to the local newspaper the investor gave money not only to the nursery but also to the building of guest accommodation. The photograph shows him at the ceremonial handover of the latter.

The mayor said that other well-connected businesses were keen to “steal” the project and build the terminal with state money — probably at greater expense. “We were under strong attack. But I wrote to Viktor Orbán saying that it would be better for the country if the project was built by private money, and the prime minister luckily made a wise decision.”

They don’t flip back and forth

“I respect those villages that always vote the same way. Since the first open elections in 1990 Fényeslitke has voted for the right every time, we doesn’t flip back and forth,” the mayor said. He said there were historical reasons for this. Before the Second World War for the most part relatively prosperous peasants lived in the village who lost their wealth in the state socialism era. That’s why they do not vote for the left wing, and they brought their children up to vote for the right wing too. Compared to the other villages in the area the people here are comfortably off. The tax records show that in terms of income it is in the top ten villages in the county. The new investment will double that income.

He said that there are far fewer people employed on public-works schemes in the village compared to the neighbouring settlements — 10 in all, while other places have 150-250 each.

There few Roma living in Fényeslitke, compared to the surrounding villages. They give a more nuanced picture of why there so few people are employed on public works schemes, Several said that they had reported for such work numerous times, but the mayor had not given them any. Several of the Roma live in Gárdonyi utca, which happens to be the one street in the village that is untarmacked.

“The mayor said once that there’s no money to tarmac it because the street is not on the map,” they said. One of them said that when it rains the street turns into mud. In the nursery and the school the other children make fun of those from Gárdonyi utca because their shoes are muddy.

Everyone was full of praise for law and order in the village. “There’s no trouble,” they said. One woman on a bicycle said that this village of 2,500 people was the exception in the area because it really was “all peaceful”.

Everywhere we went asking the young what sort of entertainment there was in Fényeslitke, they all gave the same answer: “Nothing.” There used to be a disco, they said, but that closed down. Some of them added that there was a secondhand clothes shop opening soon.